After a long battle with stage IV lung cancer, conservative giant and conservative radio talk show pioneer, Rush Limbaugh has died at the age of 70. On February 4, 2020, First Lady Melania presented Rush Limbaugh the Presidential Medal of Freedom at President Trump’s State of the Union Speech. Rush Limbaugh’s tearful acceptance tugged at the heartstrings of everyone who watched.

Rush’s beloved wife Kathryn opened his show this morning with the devastating news, assuring all of his fans that if he could be here with them today, he would.

God Bless you Rush.
I love you. Always and ever.

RUSH: A yearly tradition. We wrap up with Mannheim Steamroller and Silent Night, and my ongoing attempts to thank everybody in the audience — all of you — for everything you mean to me. That last call. That reminds me how much I love all of you, how much I so appreciate everything you’ve meant to me and my family.

You don’t have any idea how… I know so many people think this program has changed their lives for the better. You have no idea what you all have meant to me and my family. The day’s gonna come, folks, where I’m not gonna be able to do this. I don’t know when that is. I want to be able to do it for as long as I want to do it.

I want to, but the day will come where I’m not going to be able to, and I want you to understand that even when the day comes, I’d like to be here. ‘Cause I have this sense of needing to constantly show my appreciation for all that you have done and meant to me. So I hope you all have a great Christmas, a great new year, and I hope that the things that are in store for all of us in the coming year are certainly better than what we have endured in 2020.

I don’t know too many people who’ve enjoyed 2020. There are probably some sickos out there who have. But 2021 has to be better. We’re gonna try to make it that way here at the EIB Network. Again, folks, thank you so much. I wish there were a way to say it other than “thank you.” You’re just the best. My family is just the best. Thank you. Merry Christmas, everybody, from all of us to all of you. Make it happen!

At the top of Rush Limbaugh’s website (RushLimbaugh.com) is a message from Rush. The message isn’t about Rush, it’s a message about how his supporters can help American heroes.

RUSH: The goodness that is done by all of you is never going to be reported in the mainstream media. And that’s okay. But it’s not. You are some of the most generous, giving, selfless people in the world. And I know that you don’t engage in your generosity and your charitable acts just to get noticed for it. That’s not why you do it. You do it because it’s the right thing to do. But it’s important that you know how much your support of all of the campaigns that we have run here at the EIB Network and the RushLimbaugh.com Store mean to us.

The most recent one that we’re running is the Support Our Heroes campaign at the Rush Limbaugh Show Store, and you have once again responded to what you’ve seen and you’ve come through. Because of you, we’ve been able to raise hundreds of thousands of dollars that are donated directly to law enforcement and their families. While the Democrats are out talking about defunding the police and doing this, that, and the other thing and criticizing them, you have been supporting them. 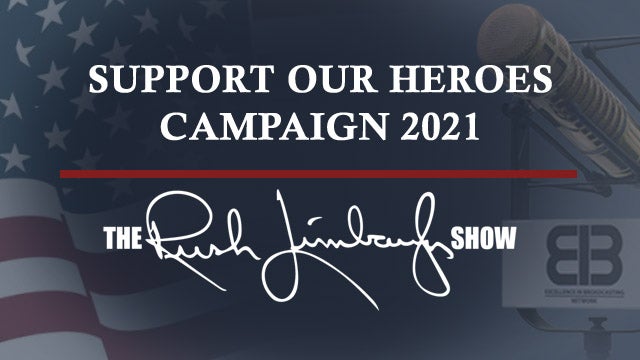 I mean, this has been an incredible year. Our police have been demeaned, they’ve been ridiculed for actions by individual, evil people, not the entire police force. Some weeks ago we asked this audience to nominate heroes that you personally know or know of in law enforcement. We promised to donate 100 percent of the profits from the Rush Limbaugh Show Store to this campaign. And we have, 100 percent of the profits have gone to law enforcement.

We received thousands of entries. People were incredibly touching in their descriptions of the law enforcement people they nominated. I wanted to share one with you as an example of the type of heroes who are out there in our police force and the types of wonderful people that Support Our Heroes campaign is recognizing this year. Officer Erin, E-r-i-n, severely injured after a routine traffic stop turned into a shoot-out with an armed suspect who had an AK-47. Officer Erin was struck by the suspect, lost part of her hand, but continued to return fire with her partner, demonstrating an incredible will to survive.

Since that shooting, another part of her hand had to be amputated due to the pain. As a result of the disability, she had to reluctantly leave her job in law enforcement. However, officer Erin, E-r-i-n, continues to give back to law enforcement using her shooting and survival as a training that she does not accept any compensation for. She is training others based on her own actions. She’s doing it gratis. This is selfless dedication, even after her injury, has saved officers’ lives by her willingness to share her horrible experience.

Officer Erin only wishes for other officers to come home safely at the end of their shift. She’s brave, honest, humble. Truly an example of overcoming adversity. On that day and always, Erin displayed the gentleness of a mother when needed and a strong commanding officer when it was required. And we would not have heard of her if she hadn’t been nominated by somebody in this audience for her heroism. We were able to learn about her, her story and direct some of the profits from the EIB Network, the Rush Limbaugh Store to Officer Erin and her family.

It is because of people like you making it possible. So, you’re doing great things. The goodness that’s in your hearts, the things that you have enabled us to do throughout this entire year, the mainstream media will never report it, but you know it, and that’s what matters.