On Monday, Newsweek reported on AOC’s harrowing story of how she had to fearfully hide in a bathroom during the Capitol unrest on January 6th, 2021:

“And so I run back into my office,” Ocasio-Cortez said. “I slam my door. There’s another kind of like back area to my office, and I open it, and there’s a closet and a bathroom. And I jump into my bathroom…In between the screams and the yells,” Ocasio-Cortez added, “I mean, I thought I was going to die.”

Gripping stuff. In a personal video, AOC elaborates and claims that bathroom doors and hinges were moving and people were screaming.  It is truly unforgettable.

This was one of the most heartbreaking moments of AOC’s IG live pic.twitter.com/BumKbriwmy

“And, like, also, one of those thoughts that I had was, you know, I just happen to, you know, uh, be a spiritual person and be raised in the context and I really just felt, like, you know, if this is the plan for me—ummm, then people will be able to take it from here…Um, I had a lot of thoughts, but that was the thought that I had about you all.”

Her voice begins to crack here, as though she is reliving a painful truth about the fragility of life:

“Um, I felt that, uhh, if this was the journey that my life was taking, I felt that things were going to be ok.”

She then begins to cry and wipes a tear from her eye as the video ends.

Because it is one!

It turns out that AOC wasn’t even in the Capitol building that day. Fellow US Rep Nancy Mace tweeted about her confusion regarding the lying congresswoman’s statement about fearing for her life, saying “My office is 2 doors down. Insurrectionists never stormed our hallway.”

.@AOC made clear she didn’t know who was at her door. Breathless attempts by media to fan fictitious news flames are dangerous.

My office is 2 doors down. Insurrectionists never stormed our hallway. Egregious doesn’t even begin to cover it. Is there nothing MSM won’t politicize? pic.twitter.com/Tl1GiPSOft

And what about the guy who came to her room?  Well, that was true–except that it was hired security protecting her because politicians get special armed protection all the time while they are at work that you do not get.  But, don’t worry.  For good measure, she would later denigrate him in order to appeal to her ‘defund the police’ base:

.@AOC describes a Capitol Police officer bursting into her office, says his presence “didn’t feel right” and that he was looking at her “in all of this anger and hostility.” Her staffer reportedly wondered if he would have to fight the officer. pic.twitter.com/LCj2JmmFP6

“As it turns out, however, as my colleague Bonchie reported earlier, AOC said in her Instagram drama that the person who came to her office was a Capitol Police officer. But she denigrated the officer who came to help, claiming he “didn’t feel right” and that he was looking at her “in all of this anger and hostility.” Her staffer reportedly wondered if he would have to fight the officer and suggested that he might put them in a “vulnerable situation.”

Candace Owens took to Twitter to blast the lying congresswoman, with images to remind everyone of the time the newly elected AOC staged a photoshoot showing her crying outside of a “detention center” where illegal immigrants were allegedly held. Shortly after her emotional photos hit the media, it was discovered that the former bartender turned US Rep. was actually in an empty parking lot pretending to cry.

Owens wrote: On a day in which #AlexandriaOcasioSmollett is trending, please never forget the time that @AOC staged a photoshoot dressed in all white at a parking lot to spread lies about immigrant children in cages. Faking her own attempted murder was the next logical step.

Alexandria Ocasio Smollett is the perfect name for another far-left hoaxer trying to gain sympathy from an imaginary traumatic experience that never happened. 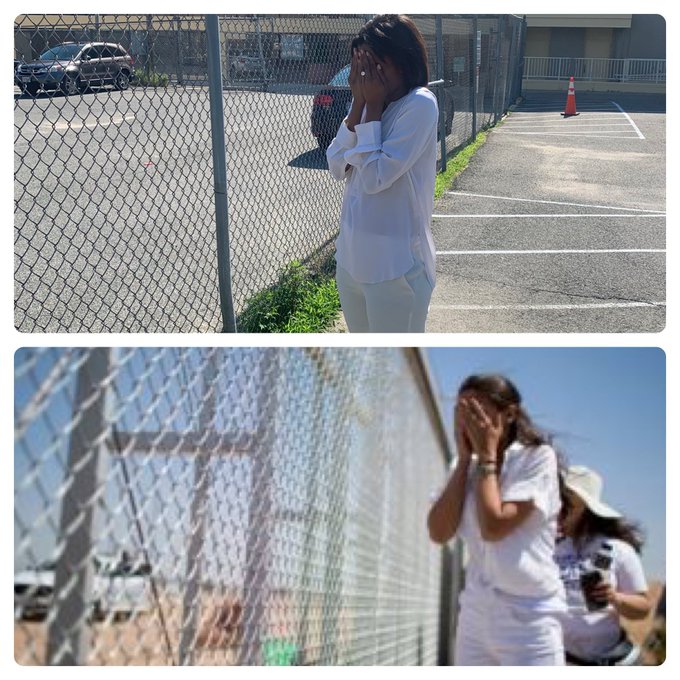 On a day in which #AlexandriaOcasioSmollett is trending, please never forget the time that @AOC staged a photo shoot dressed in all white at a parking lot to spread lies about immigrant children in cages.

Faking her own attempted murder was the next logical step. pic.twitter.com/y8mNNowMGy

AOC didn’t stop with her second horrible lie. The childish former bartender who allegedly auditioned for her role to become a United States Congresswoman doubled down with yet ANOTHER LIE!

AOC, in an attempt to strike back after she was caught lying about what happened in the Capitol building, posted a screenshot of a tweet by conservative Jack Posobiec, who tweeted about her ridiculous lie. She wasn’t finished lying yet, however…

This is the latest manipulative take on the right.
They are manipulating the fact that most people don’t know the layout the Capitol complex.
We were all on the Capitol complex – the attack wasn’t just on the dome.
The bombs Trump supporters planted surrounded our offices too.
Of course, this is yet another outrageous lie! There is NO evidence that bombs surrounding their offices were placed by Trump supporters!
Candace Owens laid into the juvenile, habitual liar, demanding that Twitter remove her tweet.

This is a dangerous lie and @TwitterSafety should remove it. There were absolutely ZERO bombs planted by “Trump supporters”
Pipe bombs were planted outside of both Republican and Democratic Headquarters the night before Trump’s speech—and the FBI has no idea who planted them. https://t.co/SB9zLqpBEa