In 2010 Eric Coomer joined Dominion as Vice President of U.S. Engineering. According to his bio, Coomer graduated from the University of California, Berkeley with a Ph.D. in Nuclear Physics.

Eric Coomer was later promoted to Voting Systems Officer of Strategy and Security although Coomer has since been removed from the Dominion page of directors.

In a stunning Facebook interview conducted by Michelle Malkin, Joe Oltmann, FEC (Faith Education Commerce) United founder, revealed how he infiltrated Antifa and how during a conversation with Antifa members, he discovered “Eric from Dominion” was allegedly part of the chat during the week of September 27, 2020.

Oltmann explained that “Eric” was telling the Antifa members they needed to “keep up the pressure.” When one of the caller’s asked, “Who’s Eric?” someone answered, “Eric, he’s the Dominion guy.” Oltmann said that as the conversation continued, someone asked, “What are we gonna do if F*cking Trump wins?” Oltmann paraphrased how Eric (the Dominion guy) responded, “Don’t worry about the election, Trump’s not gonna win. I made f*cking sure of that!”

After Oltmann, who runs a data company, finished the call, he started to investigate “Eric from Dominion,” in Denver, CO. and came upon Eric Coomer. Oltmann admitted that it didn’t make sense that Eric Coomer would be the Antifa member on the call and that at the time, he knew nothing about Dominion Voting Systems.

It wasn’t until after he started hearing about Dominion Voting Systems in the news following the election that he remembered the remarks made by “Eric from Dominion” on the Antifa chat.

Oltmann began digging into Eric Coomer, trying to find anything he could about him. Oltmann finally hit gold when he was able to (legally) access what he claims is Dominion VP, Eric Coomer’s Facebook page. What he found was stunning. Joe Oltmann said he never saw such hate and vitriol coming from someone who has a Ph.D. in Nuclear Physics. Oltmann explained to Malkin that Coomer actually re-posted the Antifa manifesto to President Trump on his Facebook page.

The Gateway Pundit posted a copy of that Antifa letter to Trump in a previous report.

Joe Oltmann was removed from Twitter this week.  His tweets on Eric Coomer upset big tech.

Oltman admits that by revealing this information about Coomer, he is putting himself in danger.

***WARNING***Facebook may not allow you to see the video below

Oltman, who has been suspended from Twitter, appeared with OANN’s Chanel Rion to discuss his findings related to Dominion’s Eric Coomer, who has mysteriously fallen off the radar since The Gateway Pundit first reported on this story.

2)
For those unfamiliar with the Dominion voting system:

Dominion Executive: “Trump is not going to win. I made f***ing sure of that.”https://t.co/2n1J0OCAty

He may have a Ph.D. in Nuclear Physics, but when it comes to hiding his hatred for President Trump, Trump supporters, law enforcement, or even for Texans, Dominion’s Eric Coomer isn’t very smart.

In 2017, when Coomer was in Nevada, he mocked President Trump’s Election Integrity Commission on Facebook.

Coomer shared a Washington Post article titled, “The voting commission is a fraud itself. Shut it down.” The article, written by the unhinged Trump hater Jennifer Rubin, was an attack on President Trump’s May 11, 2017, Executive Order on the Establishment of Presidential Advisory Commission on Election Integrity.

Dominion’s Director of Strategy and Security’s response to Rubin’s article appears to be a bit unhinged: “And in other news…There be some serious fuckery going on right here fueled by our Cheeto-in-chief stocking lie after lie on the flames of [former Kansas Sec. of State Chris] Kobach…You want something serious to worry about? This is it. ” Here’s what Coomer had to say to his “friends” on Facebook on July 21, 2016, who are Trump supporters. 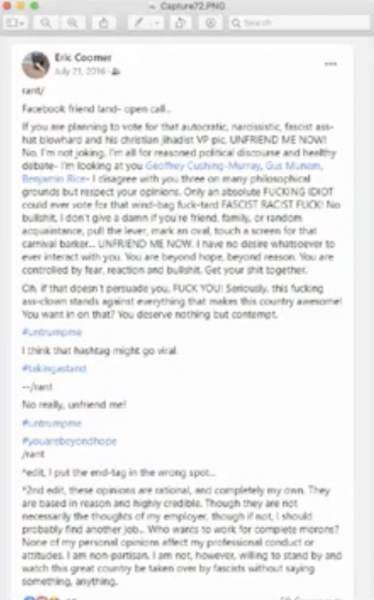 If you are planning to vote for the autocratic, narcissistic, fascists, ass-hat blowhard and his Christian jihadist VP pic, UNFRIEND ME NOW! No, I’m not joking. I’m all for reasoned political discourse and healthy debate- I’m looking at you ( 3 names of friends). I disagree with you three on many philosophical grounds but respect your opinions. Only and absolute FUCKING IDIOT could ever vote for that wind-bag fuck-tard FASCIST RACIST FUCK! No bullshit, I don’t give a damn if you’re friend, family, or random acquaintance, pull the lever, mark an oval, touch a screen for that carnival barker—UNFRIEND ME NOW. I have no desire whatsoever to ever interact with you. You are beyond hope, beyond reason. you are controlled by fear, reaction, and bullshit. Get your shit together.

Oh, it that doesn’t persuade you, FUCK YOU! Seriously, this fucking ass-clown stands against everything that makes this country awesome! You want in on that? You deserve nothing but contempt.

Near the bottom of his rant, Coomer clarifies: “These opinions are rational and completely my own. They are based in reason and highly credible. Though they are not necessarily the thoughts of my employer, though if not, I should probably find another job. Who wants to work for complete morons?” Comer appears to be trying to cover his tracks, “None of my personal opinions affect my professional conduct or attitudes,” adding, “I am non-partisan.” According to Oltmann, Eric Coomer isn’t a big fan of the police. During his interview with Malkin, he shared several screenshots of anti-police rhetoric like an image a link to YouTube from the hip-hop song “Dead Prez.” Here’s a portion of the lyrics from the “Dead Prez” song in case it’s not on your personal playlist: This screenshot, captured by Joe Oltmann, makes one wonder if Eric’s not a fan of the United States either. A lot of people may be glad to know that Texas rejected using Dominion Voting Systems in their state after reading this garbage!

30 states in America, including every critical swing state in the November election, used Dominion Voting Systems.

We cannot confirm or deny any of the information provided by Oltman in his interviews with Michelle Malkin or Chanel Rion.