Hundreds of patriots traveled from across the state of Michigan to participate in a historical delivery of an estimated 7,500 affidavits signed by Michigan residents demanding a forensic audit of the November election.

A woman we spoke with made t-shirts for the event that read: “Patriots Want A Forensic Audit!” The back of the t-shirt gave details about who citizens should call to demand a forensic audit. The names and numbers of Senate Majority Leader Mike Shirkey, Senate Oversight Committee Chair Ed McBroom, and House Oversight Committee Chair Steve Johnson, all Republicans in a Republican majority House and Senate, hold the key to ordering a forensic audit in a state where a majority of Republicans still believe that election fraud played a part in the outcome of the November 2020 election. Lana Kristal and another great patriot helped to wheel boxes of affidavits to the front steps of the Capitol building, where multiple clergy members prayed over the boxes.

Michigan’s first black, female Secretary of State candidate Kristina Karamo (R) delivered boxes of thousands of affidavits to Michigan’s dishonest Democrat Secretary of State Jocelyn Benson. After walking several blocks to arrive at SOS Benson’s office, we discovered a sign on the front of the building that read “ID Required To Enter Building.” Next to the sign on the SOS’s office was another sign that read “Valid Photo ID Is Required For Access.” Michigan’s most NON-transparent Sec of State Jocelyn Benson has been arguing with MI lawmakers that a valid photo ID is somehow racist. “Does this mean the Sec of State Benson is a racist?” Kristina Karamo asked, reminding everyone that they’re being “gaslighted” by the Democrats who use race as a tool to make cheating in elections easier.

The security guard working the front door of the SOS Office refused to allow Kristina Karamo to enter the building with the affidavits. Although the security guard appeared to be expecting our visit, Karamo explained that we were there to deliver the affidavits to Sec. Benson. The security guard left, and when he returned, he informed us that he didn’t believe anyone would sign the form Karamo brought to prove the boxes had been received. Eventually, the security announced that Benson’s office would only agree to rubber-stamp the form, as they refused to sign the receipt of delivery.

Watch how our dishonest and very NON-transparent Secretary of State Jocelyn Benson responded receiving affidavits calling for a forensic audit by thousands of Michigan citizens:

Rosanne Ponkowski, one of the founders of the amazing Michigan Conservative Coalition, who together with Marian Sheridan was responsible for gathering most of the affidavits that were delivered to Lansing today, is seen sharing a smile and a hug with MI SOS candidate Kristina Karamo after all 7,500 + affidavits were delivered. 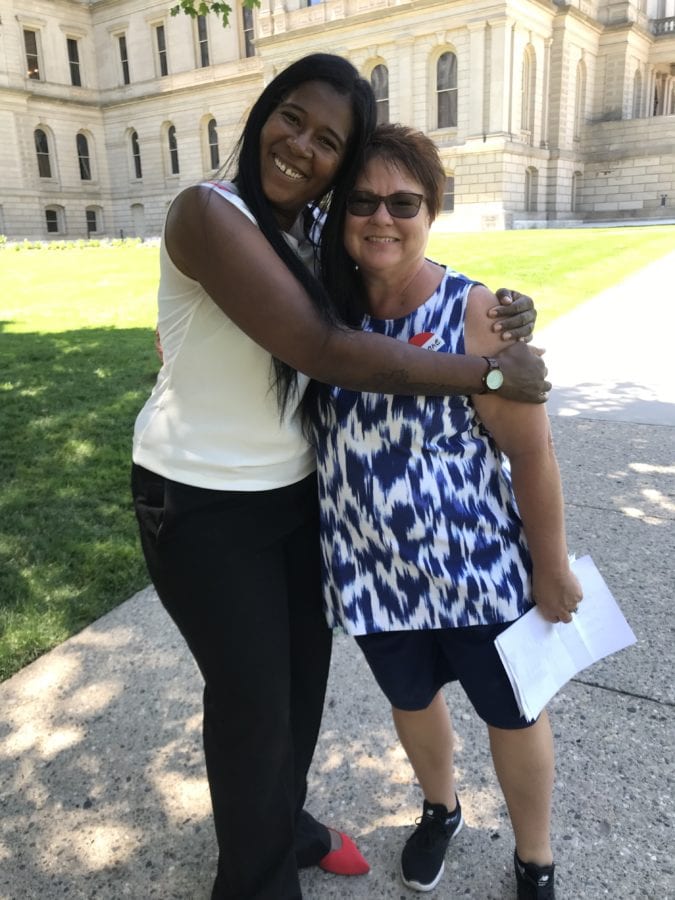