At an “all ages” drag show in New York City, white liberal parents proudly took their young children to see a half-naked man sharing his bare butt in their faces. As an overweight man in a thong awkwardly lept around on a small stage, he somehow gathered a massive crowd, many of whom were children. 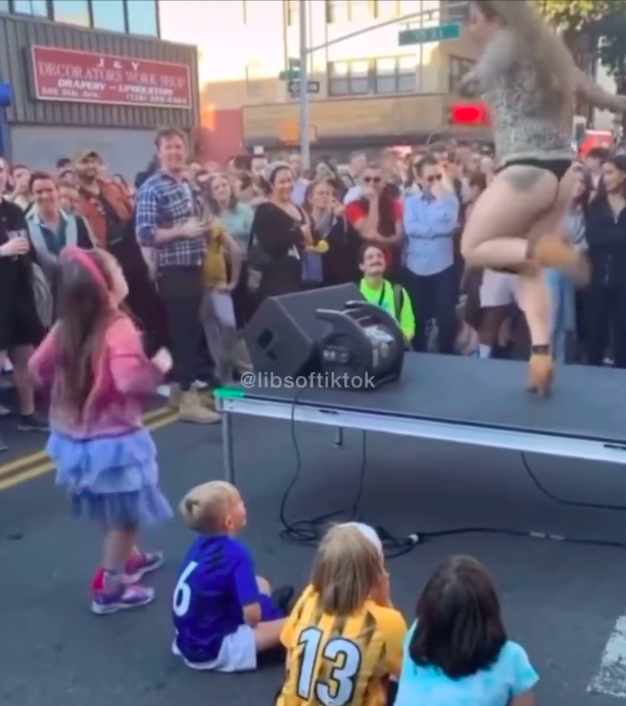 There are many things that are baffling about this event, the first of which is why a parent would think this is appropriate to bring a child to. When did a man without pants on who’s shaking his rear end in your face become a “family-friendly” activity?

Second, what about a man in heels and a thong is so attractive to these left-wing parents, or anyone for that matter? It can’t be argued that this is a legitimate performance of art because, as seen in the video, the only thing the drag queen does is shake his butt and jump around. No skill was displayed that should have, in any way, garnered applause or attention.

The popular Twitter account, Libs of TikTok, posted a video from the event. While the majority of responses expressed outrage and horror, some liberal Twitter users shockingly tried to downplay and justify the situation, arguing that nothing was wrong with the event.

A drag queen teaches a child to twerk while shaking his near-naked butt in front of children at a recent “all-ages” drag show in NYC pic.twitter.com/pKdFHmk2Ee

Tom Chapman, a liberal news editor and “freelance film writer,” was a staunch defender of the event, making fun of the “far-right” for being disturbed by a man parading around half-naked in front of children.

One of his tweets, which he quickly deleted after receiving major backlash from others, suggested that the only way you could find this disturbing is if you were an overdramatic far-right-winger.

Chapman wrote, “The far-right be like…” accompanied by a meme captioned “Oh, won’t somebody please think of the children?” Another liberal account replied to the Libs of TikTok video, sarcastically saying, “oh no, not butts,” to which Chapman responded, “Careful, I hear everyone has one these days!” Again the liberal writer tried to, for whatever reason, pretend like the critics of this event are being irrational.

All the other liberals trying to defend the contents of the video clip seem to be missing the point of how inappropriate the entire thing was, simultaneously excusing pedophilic, grooming behavior.

Careful, I hear everyone has one these days!

Somehow, people have been so brainwashed into the idea that drag shows are important for young children to watch that they are able to justify bringing their kids to events such as these ones.