Video: Marshall University Professor Suspended For Death Wishes on Trump Supporters ‘I Hope They All Die Before The Election.”

Jennifer Mosher, a Biology Professor at Marshall University, was suspended after telling her students on Zoom that she hopes Trump supporters get the coronavirus and die. Mosher wishes’  are in reference to the recent rallies held by the Trump campaign across the country. This clip was captured by a student:

You can’t argue with them, you can’t talk sense with them, um, I said to somebody yesterday I hope they all die before the election…

The video went viral on Thursday, the university commented on the professor’s actions to the media:

“Marshall University this morning announced it is aware of an overtly political statement made by a faculty member in a recent virtual classroom session and widely circulated on social media.

The university does not support or condone the use of any of its educational platforms to belittle people or wish harm on those who hold differing political views.

The professor was removed from the classroom yesterday and is on administrative leave, pending an investigation.

There will be no further comment on this personnel matter at this time.”

This deep hate from the Left isn’t new as the mob attacked a couple for ‘killing’ Ruth Bader Ginsburg after they had her officiate their wedding, as previously reported by 100%FedUp.

Just weeks ago, People magazine reported on ailing Supreme Court Justice Ruth Bader Ginsburg officiating a wedding at a private residence. Now the newlyweds have been forced to make their Twitter accounts private after hateful tweets from the left accusing them of “killing” Justice Ginsburg.

The bride posted a photo from the wedding with the caption, “2020 has been rough, but yesterday was Supreme,” but has since removed the tweet because of the hate she’s received from the angry leftist trolls.

A mask-less Justice Ginsburg presided over the wedding of family friend Barb Solish to Danny Kazin in August. Even though the couple had been tested for COVID-19 before the wedding, the leftist trolls still attacked the couple after Ginsburg’s death yesterday claiming they “killed” Ginsburg:

“i think it’s funny that the lady who had rbg officiate her wedding without a mask has to now deal with potentially having killed one of the most beloved people in the entire US because she just had to have her wedding officiated by rgb so she could do an epic tweet lol,” 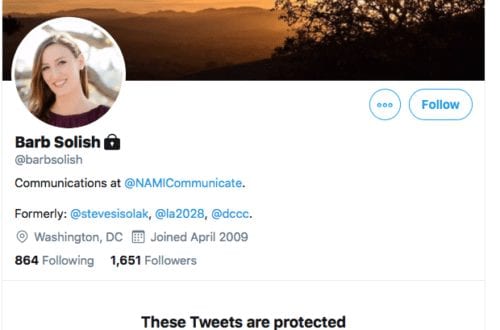